Hello! We are running our annual fundraising. Please consider making a donation if you value this freely available service or want to support people around the world working towards liberatory social change. https://riseup.net/donate.

drebs Nov 14, 2017
Page history
This is an old version of this page. You can view the most recent version or browse the history.

This is a report about work done to address the 2017 roadmap plan.

This document is still under construction.

After reading this, you should be informed about:

The LEAP project aims to develop server-side infrastructure and client-side applications for increasing the security of user's communications:

The component of the LEAP infrastructure that addresses client-side encryption and synchronization is called Soledad. Until the beginning of 2017, we have developed a solution in python that works for Linux and serves as a base implementation for other platforms.

Many challenges arose during development. Some of them are performance issues related to the encryption and transfer pipeline both in server and client side, and had to be addressed in a careful way with the aid of some benchmarking / preformance measurement infrastructure:

In the first semester of 2017, LEAP applied for a Mozilla grant with the aim to work specifically in creating a benchmarking infrastructure that could help fix existing problems and also help drive development decisions. The issues we wanted to address at that point were:

The proposed roadmap was split in 5 activities:

Next, we address each item individually to give an account of its current state of development.

In July 2017 LEAP launched the https://benchmarks.leap.se/ website, where benchmarking statistics can be seen for every set of commits pushed to Soledad's repository. We currently have time, memory and cpu consumption for each test of a special benchmarking set of tests. The solution is based on elasticsearch to store results of benchmarks, kibana to plot graphs, and some custom scripts to glue everything together. Documentation on how to add more tests to the benchmarking suite and website is available.

As Soledad works with a reactor pattern, it is important to have feedback on possible reactor blocks and the overall reactor responsiveness. This is mostly done, but still not merged (#8908 (closed)).

On our todo list we still have measurement of speed o I/O, server scalability when used by concurrent clients, and adding some kind of warning or merge rejection when we introduce changes that cause performance to drop dramatically in some scenario.

The pristine version of Soledad used to store all data as JSON documents, which means that binary data was also being treated as strings. This has many drawbacks, as increased memory usage and difficulties to do transfer and crypto in a proper binary pipeline.

Starting with 0.10.0, Soledad now has a proper BLOB infrastructure that decouples payloads from metadata both in storage and in the synchronization process. The first use case was mail delivery, and we implemented an API so the MX component now hands Soledad Server the responsibility of packing and storing incoming messages as public-key-encrypted data. Metadata is synchronized using the usual sync mechanism, while BLOBs are synchronized in parallel and on-demand. This makes it feasible to have much quicker feedback of incoming messages and load their content and attachments on demand, as is done in most implementations of IMAP clients.

The following is a graph comparing the ratios of Inbox loading time having legacy JSON-based sync as baseline and blobs implementations with different features: 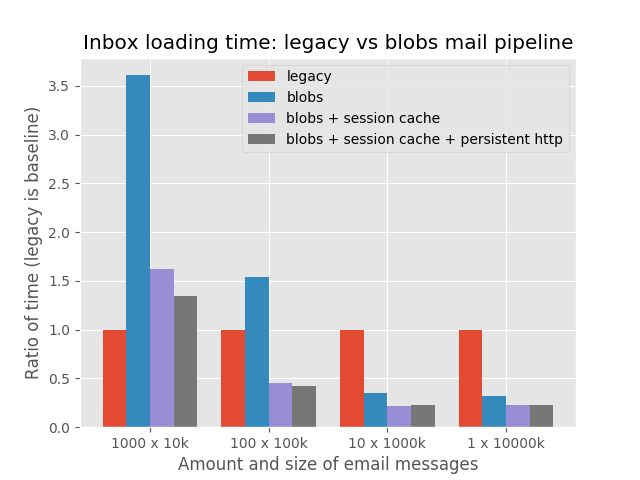 The incoming mail pipeline considered on those tests consists of the following:

The implementations compared in the figure above are: